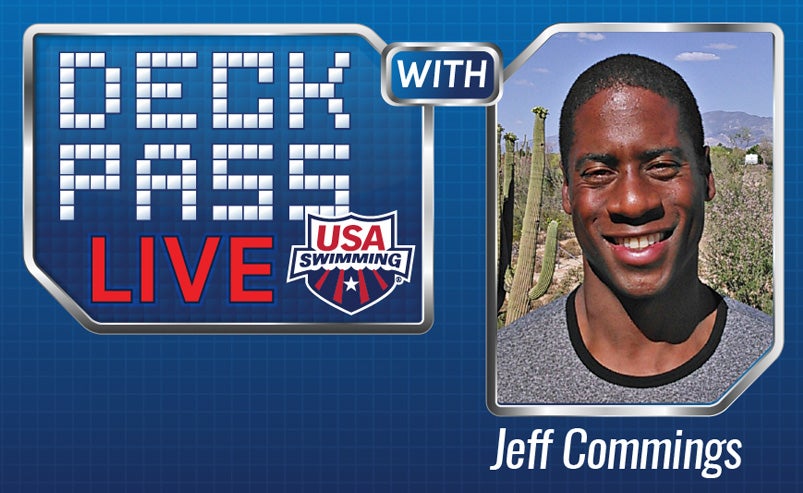 Jeff Commings began his swimming career in St. Louis when he was 4 years old, where he was literally thrown into the water at a local Boys’ Club. After his initial floundering, Jeff took to the water with ease and joined the Boys’ Club team. A year after his introduction to swimming, he signed up for his first meet.

Jeff improved, winning his first trophy at 6 for the 25 fly. Later, as he grew, Jeff found a natural talent for the breaststroke. After rising in the local ranks, he made a name for himself on the national scene with a Top 16 ranking among 11- and 12-year-olds in the 50-meter breast. 1991 came as a breakout year. He was 3rd in the 100-meter breast at the national championships, as well as a berth on the Pan-American team traveling to Cuba where he won bronze.

Jeff attended the University of Texas – Austin on a full scholarship under the tutelage of Olympic Coach Eddie Reese. His highest placing at the NCAA championships was third in the 100 breast his sophomore year. He would end his college career an eight-time All-American, USA Swimming National Team member and four-time conference champion in the Southwest Conference.

Jeff competed in three U.S. Olympic Trials, in 1992, 1996 and 2012. After the 1996 Trials, Jeff moved to Colorado Springs to train under renowned coach and former world record holder Jonty Skinner and then retired in 1998.

In 1999, Jeff discovered Masters Swimming and initially used the workouts as a way to stay in shape, vowing to never compete in another high-stress meet. That vow didn’t last long. At the 2003 Masters National Championships, Jeff won five events and set his first national record in the 100 breast. The following summer, Jeff set a Masters World Record in the 100-meter Individual Medley. More national records and world records followed.

Jeff continues to train in preparation for Masters swimming competitions. He is Co-Founder of Dolphins Of The Desert Swimming Academy.