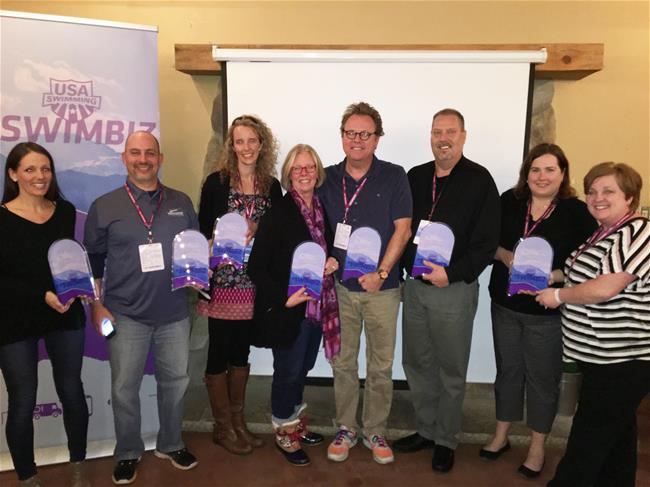 The swim clubs were honored with the following awards:

Best in Social Media
Marietta Marlins (Marietta, Ohio) was awarded Best in Social Media because of their consistent social media strategy focused on unique and engaging content. The club’s “Try it and Like it” campaign was extremely effective, creating 25 tryouts and 20 new members.

Best in Sponsorship
TAC Titans (Cary, North Carolina) earned Best in Sponsorship after the team raised more than $10,000 in cash and in-kind sponsorships since June 2016, including support from local restaurants, health services, TYR and hotels. Their new 28-foot videoboard was used for sponsor programs to boost sales, and a FloSports partnership for live streaming of five major events, generated more than $15,000 in one event alone from ad sales.

Best in Fundraising was awarded to the Rockford Marlins (Rockford, Illinois) after the team partnered with city visitors bureau to serve local parade as hot chocolate vendors with proceeds benefiting the team. They also hosted a “12 Days of Christmas” cash raffle resulting in donations and social support, raising $17,500 in swim club funds over the year.

Best in Multicultural Marketing
The Buffalo City Swim Racers (Buffalo, New York) were honored with this award because of their grant driven program that offers free year round learn-to-swim and competitive opportunities as incentives to encourage low-income and minority youth to perform in the classroom.

SwimToday Award
Cultivated after USA Swimming’s SwimToday program to grow participation in the sport this award went to the King Marlin Swim Club (Oklahoma City, Oklahoma) for the team’s use of effective and original recruitment and retention programming with incentives for swimmers. KMSC raised membership by 35 percent in 2016, partially thanks to their Purple Cap Program, incentivizing recruitment for swimmers on the team.

Sunkist Swim Team is a three-time winner of Marketing Club of the Year honors.

“These seven clubs have done an excellent job creating a name for themselves through their marketing efforts,” said USA Swimming Chief Marketing Officer Matt Farrell. “We want these teams to inspire other swim teams to follow or invent their own create marketing campaigns and make swimming a better experience overall for new and existing members.”

This year's #SwimBiz Club Marketing Awards featured a record number of entries, highlighted by 18 submissions in the social media category.

To find out more about the #SwimBiz Marketing Awards visit www.usaswimming.org.