Erin Popovich is Excelling with Paralympic Swimming Once Again

As an athlete, Erin Popovich had no idea how much work went into the incredible amount of work and planning it takes to run an event or get a team to a major competition.

As the new Associate Director of Sport Operations for U.S. Paralympics Swimming, the 14-time Paralympic champion is learning every day that it’s not an easy process.

It takes a lot of organization, dedication, determination and hard work – traits Popovich gained during her illustrious career and uses every day.

“It’s been really nice to get back to swimming, which is obviously a sport I love and have a great appreciation for,” said Popovich, who came to U.S. Paralympic Swimming a month ago after seven years with U.S. Paralympics and U.S. Paralympic Cycling. “I definitely enjoy the other side of sport.

“I’m really excited to be back with U.S. Paralympics Swimming and the direction the program is heading. To be able to take what I’ve learned through competing and on the managerial side and apply it to this team heading into Tokyo 2020 is a dream come true.”

The side that anyone familiar with swimming knows about Popovich is that she was the athlete who helped put the Paralympics – and Paralympic swimming, in particular – on the sports map.

During her stellar career, Popovich won 19 Paralympic medals –14 of them gold. Her performances – including her seven gold medals at the 2004 Athens Paralympics – made her a household name in the swimming world – Paralympic and otherwise.

Four years later, she set three more world marks while winning seven gold medals in seven events, and a year later, she won the first ESPY Award for Best Female Athlete with a Disability and was named the  Women's Sports Foundation  Sportswoman of the Year.

At the 2008 Beijing Games – which would end up being her last – she won an additional four gold and two silver medals and broke two more world records. Once again, in 2009, she won the ESPY Award for Best Female Athlete with a Disability.

When Paralympic swimmers today speak about the role models they had growing up as young athletes with a variety of different physical limitations, Popovich and Jessica Long are often the names that come up first.

And when Long talks about her role models, the discussion always starts and ends with Popovich.

“I take a lot of pride that I was able to help move the sport forward and make it more visible,” she said. “I want to see Paralympic swimming in the United States and around the world continue to grow. I always wanted to represent myself, team and country on the highest level and show that you can accomplish anything as long as you have the right focus and determination.

“Jessica has really elevated swimming and the Paralympics through her ability to be open and share her life and experiences. Because of that, sponsors and organizations around the country and the world have really opened their arms to Paralympic athletes and spreading awareness of her story and the movement.”

Popovich was born with  achondroplasia, a genetic disorder that restricted the growth of her limbs. Her parents, a teacher and a physician, moved their family to Butte, Mont., when Popovich was five, and during childhood, she wore braces to straighten her back and legs.

She was interested in sports from an early age, riding 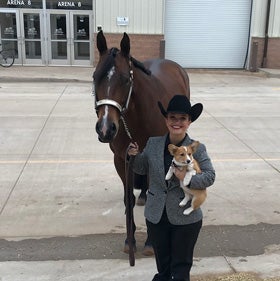 horses (which she still does every chance she gets) and playing soccer, volleyball and basketball.

But it didn’t take long once her classmates hit their growth spurts in middle school and Popovich didn’t that she really started to notice “her difference” physically and in the sports she had played and loved since she was really young.

“I noticed the biggest change when I was in my early teens and puberty hit,” she said. “Kids were growing 6-12 inches in a year, and I maybe grew half an inch in a year. Nothing really changed for me other than height. But I’ve always known I was different – I just don’t know how aware I was of it. My family always treated me the same as my brother and sister.

“There were times I was frustrated, mad and upset that I wasn’t growing as fast as the other kids, and I was teased or sometimes excluded. Unfortunately, that happens to a lot of kids regardless if they have achondroplasia or dress in last year’s clothes. It’s how you choose to address and deal with these situations that gets you through life. I struggled when I wasn’t picked for teams or wasn’t included on certain things, but I also had some great friends, teachers, and family who looked out for me and also helped explain things to me.”

When Popovich was starting to be passed over for other sports, she found swimming. At 12, she joined a swim club, and by the age of 15, she competed at the 2000 Paralympic Games

Always competitive and active, Popovich found a sport in swimming that fit her body type and desire to stay active and motivated.  It was a new challenge and adventure that provided her an opportunity to make new friends and find new ways to be competitive.

And even though she found herself losing to many swimmers in her age group, Popovich said she could see the changes and improvements in her times and focused on that.

“As kids started to hit growth spurts, it was becoming harder for me to keep up,” she said. “I needed another competitive outlet and always wanted to try swimming. We had one team in Butte, Montana – the Butte Tarpons Swim Team – so I joined the team and started a career that I had no idea where it would take me.

“I had a great coach, Marie Cook, who taught me how to swim something other than the dog-paddle. She did some research into events for people with disabilities and found the USA Swimming National Disability Championships in Minneapolis the following summer. Let’s just say the rest is history!”

When she started, U.S. Paralympics did not exist. There was no Paralympic National Team or funding. Once the National team formed, members were required to make the standards and podium to keep their National team spot.

And even though it wasn’t much money, Popovich said it was a huge motivation to keep swimming.

She said she was very fortunate that she was able to 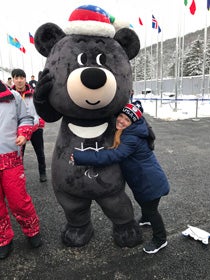 decide when she wanted to retire – and she’s never looked back on her career with anything but love and great memories.

“After Beijing in 2008, I was unsure if I wanted to continue swimming,” she said. “I had graduated from Colorado State University in the fall of 2007 and was solely focused on the Beijing Paralympics. I had a great Games winning 4 golds and 2 silvers. I took time off after the Games then naturally got back to the pool. World Para Swimming, formerly IPC Swimming, created the Short Course Worlds in 2009.

“It was very exciting to see that they were offering more opportunities for elite swimming instead of one world championships per quad. After that meet in December 2009, I knew it was time to move on. My heart just wasn’t in it anymore, and I felt like it was time to get my life outside of the pool in order. I had a great final meet with a few more podium finishes. It was great to leave knowing that the U.S. would continue to be a dominant force. For me, it was the right choice at the right time and I have not regretted it since.”