Zach Apple Finds Motivation for More in the Water Zach Apple’s decision to transfer from Auburn to Indiana last summer paid off big-time this spring.

The Hoosier senior not only won his first NCAA title as a member of the 400 medley relay, but he had seven All-America finishes in total (individual and relay).

It was by far his most successful NCAA Championship meet and he’s hoping those stellar results at 25m will carry over to this summer when he competes long course at World University Games and World Championships.

And then there’s next summer…

“I love the training group I’m a part of at Indiana; we push each other so hard every day that you can’t help but get better and faster,” said Apple, who finished his college eligibility this year but won’t graduate until this December. “I love Auburn – I will always love Auburn – but I needed a change.

“When (head coach) Brett (Hawke) left last year, I knew it was the right time for me. Indiana was a great option for me to take my swimming to another level.”

This past NCAA season has really been a continuation – extension – of success Apple has been experiencing for the past few years.

After an unspectacular but experience-gaining Olympic Trials in 2016, Apple made a meteoric rise up the U.S. rankings to place among the top 6 in the 100 freestyle at 2017 Phillips 66 USA Swimming National Championships to earn a spot on that summer’s World Championship team.

He went on to help the United States win gold in the 400 freestyle at Worlds, and then last year at Phillips 66 Nationals, he once again finished fourth in the 100 free to gain a relay spot on the 2018 Pan Pacific Championship team as well as this summer’s World Championship team. 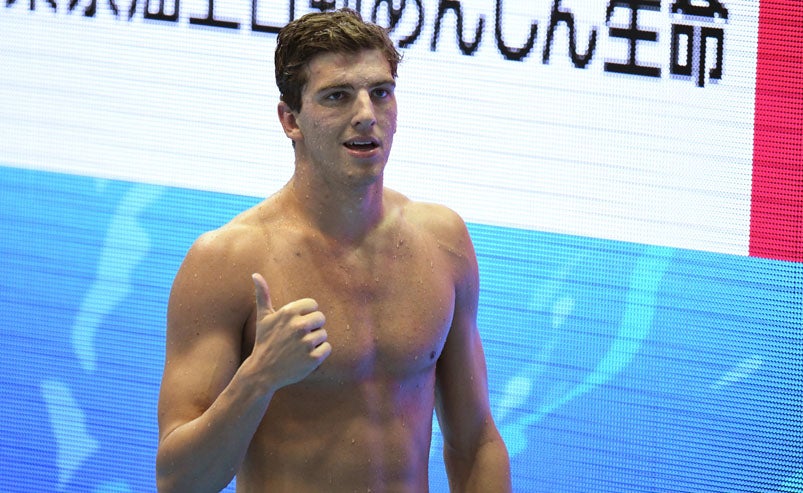 Weeks before the start of Worlds, Apple will be in Naples. Italy, to swim in the sprint freestyle events (50 and 100) as well as U.S. relays at World University Games.

In all, he’ll be away from Indiana and the United States for a month od swimming.

For Apple, there’s no better way to spend his summer.

“WUGs will be a great warm up for Worlds, but I’m particularly excited about that first meet because I get to swim some individual events and get into the rhythm of touch the wall first,” said Apple, an exercise science major who is six hours short of graduating. “Then, at Worlds, it will be great to compete against the best swimmers in the world.”

Considering he didn’t start swimming year-round until his sophomore year of high school, Apple’s rapid improvement is pretty amazing. Prior to that, he played a variety of sports, using his height (6-foot-4 in high school, 6-foot-6 now) to his advantage.

Now, he’s using that height and tremendous accompanying wingspan to become one of the top sprinters in the world. Last summer, he swam the fastest U.S. time in the 100 free during prelims of Nationals before finishing fourth in the event finals.

“I swam summer league since I was 7, and I always loved swimming, but I liked other sports equally as much and didn’t want to give them up,” he said. “I really think my youth and inexperience helped me early on, but when I went to Olympic Trials in 2016, I had only been swimming year-round for a few years, and I felt that I was at a disadvantage.

“Now, I feel much more experienced, and when I take the blocks, I am confident that I can compete at the highest levels. Everybody brings their A game to Trials – no one is playing around – so I know I will have to do the same if I want to make the next Olympic team.”

It was actually at Trials, while he watched the newly selected U.S. team parade around the pool when he realized how much he wanted to join them on the next team.

Since then, he’s focused on improving his technique and learning what it takes to be included among the world’s – and United States’ – best swimmers.

“I’m there now, but it took hard work and focus to get where I am,” he said. “I have a great appreciation for the hard work it takes to swim at this level, and I’m focused on making the most of my opportunities this summer so I can make sure I get to take that walk at the end of next year’s Trials.”

Working alongside a sprint group at Indiana that includes Blake Pieroni and Ryan Herd not only provides motivation every day to improve but it also helps him keep tabs on what the other great freestyles in the United States are doing.

But for Apple, the motivation – the drive – to get faster and win is something that’s simply part of his genetic makeup.

“I’ve always been competitive – it’s one of things I enjoy most about sports,” he said. “My motivation is more about getting the most out of myself rather than just beating my opponents. Every day in practice, I’m thinking about what Nathan (Adrian), Townley (Haas), Caeleb (Dressel) and other sprinters are doing to get faster, and that motivates me even more to find my best self.

“There’s nothing quite like swimming for the United States, and I really take pride in swimming on relays because we all want to step up and swim our best to preserve the long tradition of great U.S. relays.”