Brent Lang, Olympic Champion In The Pool And In Business Sometimes I wonder if the sport of swimming is a CEO factory. I meet a lot of former swimmers who are now leading companies, parlaying the lessons of the pool to their careers. One of them is 1988 Olympic champion Brent Lang.

Lang is the Chairman and CEO of Vocera Communications, Inc., a leading healthcare communications company. Back in 2012, when Lang was the COO, he helped shepherd Vocera to a successful IPO on Wall Street. In business, a successful IPO is a little like winning an Olympic medal - it’s impressive; a benchmark you are passionate about achieving. And since Lang has taken the reins of Vocera Communications, more accolades and honorable positions have followed: CEO World Award, EY Entrepreneur of the Year® Award finalist and Forbes Technology Council member.

I traveled the world with Lang back in the 1980s, and that young, elite swimmer he once was squares with the fully-formed adult and corporate executive he is now.  Lang was tall, soften-spoken, but clearly determined—a guy who let his swimming speak for itself. By the time I met Lang, he was already an NCAA star, and I assumed he’d always been a sprint man with a long list of 50 and 100 free records in his age group.

I was wrong. His swimming journey was a lot more nuanced.

Lang got off to a great start learning to swim from one of our sport’s elite. “My first swim instructor was Ty Steinbeck, who had been one of the early coaches for Don Schollander,” he said.  Schollander was the 1960s version of Caeleb Dressel or Michael Phelps, a five-time gold medalist from the 1964 and 1968 Olympic Games.

Lang segued to competitive swimming very young, and his first meet was born out of a one-week trial at a local team. Only seven years old, he appeared on deck in his soccer cleats from a recent game. “It was a meet for the new swimmers, and I won a blue ribbon, which I kept for years - right along with some of my other more prestigious awards,” Lang said.

Throughout his age group years, Lang experienced numerous coaches who developed his butterfly and IM. While Lang’s sprint free gear wasn’t discovered until late in his career, one age group coach in college made a big impact.

“He introduced me to the idea of setting goals with specific interim steps and metrics, so that you could track your progress throughout the season,” Lang said. “He also introduced me to visualization and meditation at an early age, which completely changed my approach to life and controlling my emotions. He taught us about nutrition, which is very common today, but back then was pretty unusual. He took a very scientific approach to training and preparation for swimming and focused on the ‘why’ we were doing things. That really appealed to me because it gave me a sense of control for how I could influence the outcome if I put my mind to it.”

Lang’s ah-ha moment came when he was a preteen; when he realized swimming was his sport.

“My family had moved to the island of Guernsey in the English Channel when I was 11 years old,” he said. “The British didn’t play much baseball or basketball, and I was not good enough to make the local soccer team, so I started focusing more and more on swimming. When I was 13, I won the British National Age Group Championships in the 100 fly and 200 IM, and I think that was when I realized that swimming was my sport.”

By 1985, Lang was back stateside, competing at the Junior Nationals in Wisconsin, which he described as one of his favorite swimming memories. On the final day of competition, he was supposed to swim the 100 fly, his best event, but he forgot to scratch from the 100 back. Meet rules stipulated you could only race in four individual events and since he’d already swum three, 100 back was it.

“I did not have a lot of race experience in the 100 back,” Lang explained. “In the preliminaries, I completely missed the backstroke flags and crashed into the wall at the 50-yard mark. After an incredible shot of adrenaline, I swam the second 50 yards and barely snuck into finals as the eighth seed. That night I managed to navigate the pool a little better and ended up winning the event—an event I was not even supposed to be competing in. It just goes to show…you have to make the best out of every situation. You never know how things will turn out.”

By the time Lang was racing as a freshman for the Wolverines at the University of Michigan, his events were IM, butterfly and backstroke. At NCAA Championships, Head Coach Jon Urbanchek gave him the opportunity to leadoff the 4x100 freestyle relay with three upperclassmen, and the magic happened. Lang’s relay leadoff time would’ve placed him higher in 100 free than his other individual events. The following year at NCAA Championships, Lang returned and won the 100 free with a ripping 42.62. 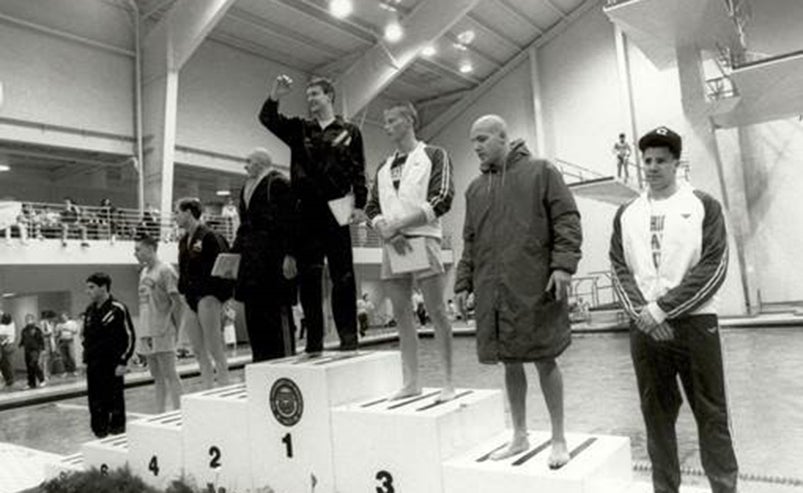 Lang stand atop the podium after his 100 free title at the 1990 NCAA Championships.

“I have always felt so fortunate that I was given the opportunity to swim on that relay, otherwise I might never have discovered my best event—the event I ended up making the Olympic team,” Lang said. “I always tell young swimmers, ‘Never pass up an opportunity to try a new or different event.  You never know what you might learn in the process.’”

Lang led off the 4x100 free relay at the 1988 Olympic Games in Seoul, Korea - a very high-pressure situation. He dropped a personal-best time, helping Team USA earn gold. He continued to represent Team USA through 1990, but he didn’t have designs on going pro. Lang was eager to start his post-swimming career using the valuable lessons he’d learned, notably that only a 10% effort separated swimmers who hadn’t made NCAA cutoff times or the Olympic Team. Lang fully understood a mere 10% effort separated him from what could be an undesirable outcome or a great outcome.

Now, three decades past his Olympic moment, most of his awards have been given away, donated to Special Olympics. He does keep his Olympic gold in a safe, and his World Championship and Pan Pacific Championships medals are framed in his office.

“I still try to follow swimming,” Lang said, who had planned to attend the swimming events in Tokyo during the Olympics, before the Games were postponed.

Lang’s modest if you haven’t figured that out yet, and he’s more than trying to follow swimming. He’s very engaged. Lang’s a USA Swimming Foundation Champions Club Benefactor, supporting the mission to Save Lives and Build Champions. And he’s a swim-fan, maybe even a little bit of a swim nerd. His favorite pro right now is Caeleb Dressel.

“As a sprinter, I never thought in my lifetime I would see someone go under 18 seconds in the 50-yard freestyle,” Lang said. “His power and speed off the blocks and the walls are electrifying to watch.”

Lang lives in the San Francisco Bay Area with his wife, Beth Van Schaak, their son, Miles, who plays baseball, and their daughter, Brook, who plays soccer.