Decades before Sabir Muhammad, Maritza Correia, Alison Terry, Anthony Ervin, Cullen Jones, Simone Manuel and many other African-American swimmers made their impressive marks in the sport, Dr. Andrew Young forged his own path through the trials of racism and exclusion in the water.

Now in his late 80s, Young laid the groundwork for future generations of African-Americans in many facets of his life – as a swimmer, pastor, congressman, ambassador, mayor and businessman. He set high standards based on his high achievements.

He swam at Howard University in the 1950's at a time when Black men and women were excluded from most swimming pools in the country.

Because there were very few pools at all, Young made it a point to develop and build additional pools, particularly in the inner cities. 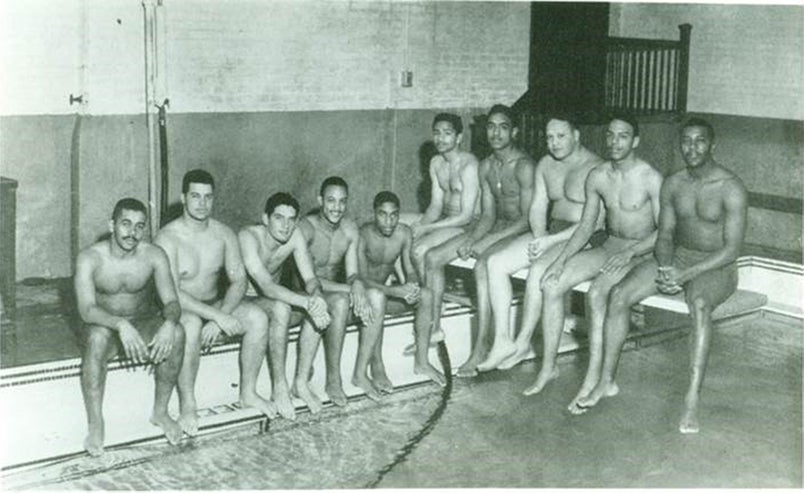 Dr. Andrew Young pictured as the second man from the right. Photo courtesy of the International Swimming Hall of Fame.

When he became Mayor of Atlanta 20 years later, he appropriated more than $1 million in funds to make swimming available to residents everywhere.

Following his graduation from Howard and Hartford Theological Seminary, Young pastored small Congregational Churches in Alabama and Georgia.  Later he worked in New York City before returning to Atlanta in the 1960s to serve as a top aide to Dr. Martin Luther King, Jr., during the civil rights movement.

Young served three terms in the U.S. House of Representatives in the 60s and 70s, and when Jimmy Carter became President in 1976, Dr. Young resigned his congressional seat to become the U.S. Ambassador to the United Nations.

In the summer of 1990, Dr. Young played an instrumental role in convincing the International Olympic (IOC) to bring the 1996 Summer Games to Atlanta.