An Inside Look at the U.S. Olympic Team Trials - Swimming Athlete Field Editor's note: all information and numbers in this article are as of May 4, 2021 and are subject to change before the start of competition. Additional information on the U.S. Olympic Team Trials - Swimming can be found at www.usaswimming.org/trials.

As the countdown to the U.S. Olympic Trials – Swimming hits its one-month-out mark, the swim community is continuing to grow with excitement. To date, there are 1,425 total athlete qualifiers for June's big event, with 770 swimmers competing in multiple events.

Currently, we have 659 women and 766 men slated to compete in both Wave I and Wave II. Representing a new wave of emerging athletes, there are 936 first time Trials qualifiers as well as 339 18&Under athletes. Currently, 21-year-old swimmers have the highest representation qualifiers among all ages, totaling 14.6% of the overall field. North Carolina LSC has the largest number of athletes attending the meet with 115 swimmers.

Wave I:
Wave I of Trials takes place June 4-7 and currently features a total of 828 athletes, 661 of whom are new additions compared to 2016. The Wave I field is comprised of 387 women and 441 men, with a high of 355 total athletes competing on Day four of prelims. The 50m freestyle is the highest-contested event in Wave I, with 185 athletes qualified. 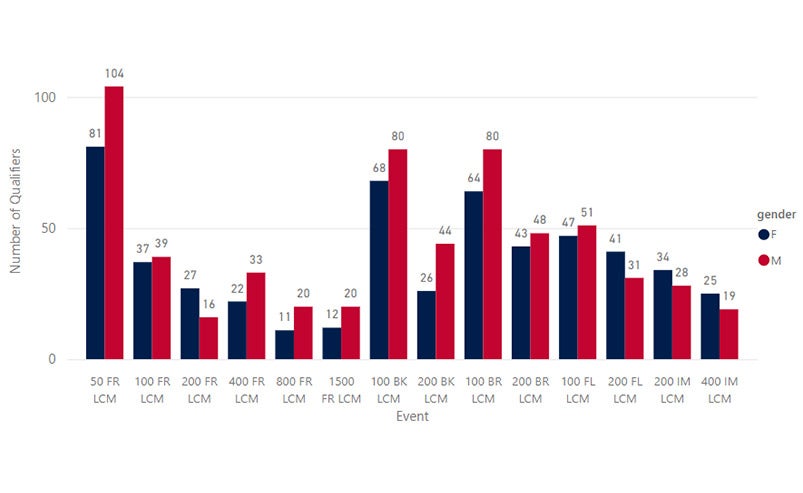 Wave II:
Wave II takes place June 13-20 and currently has 597 athletes participating. Of the nearly 600 swimmers, 322 are returning from a previous Olympic Trials event. The seven day event, consisting of 272 women and 325 men, will shape up this year's U.S. Olympic Team. Monday, June 14 currently features the most athletes in a single day (340), while the 200m I.M. has the most combined qualifiers (156) of all Wave II events. 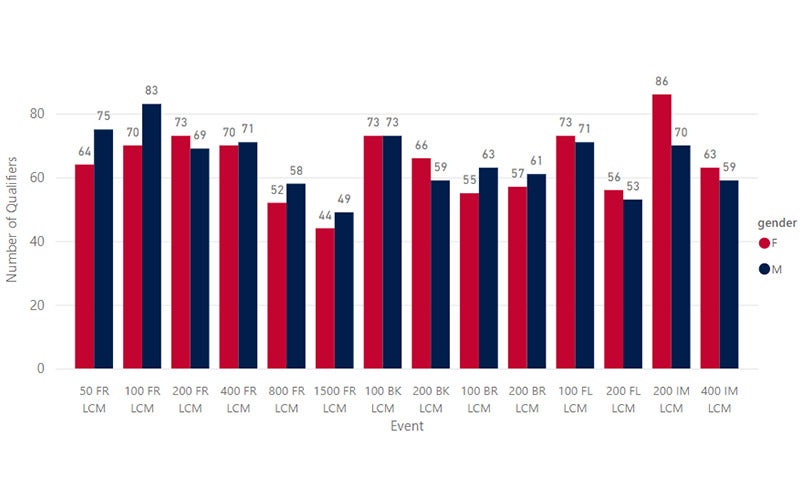 For 12 days this June, fans can expect fast swimming from some of the nation's best athletes. Excitement for the meet is at an all-time high after the COVID-19 pandemic postponed the competition, but the biggest domestic stage in swimming is almost here. Get ready.