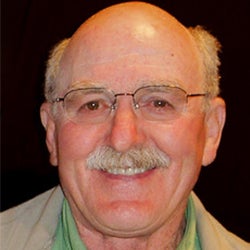 William L. “Buzz” Boomer, long-time coach of the University of Rochester men’s swimming team and international authority on swimming technique, died on January 9, 2022 with his wife Sally Fischbeck by his side. They shared 44 years together.

Bill credited his teams’ successes to his fertile collaboration with swimming scientist Albert B. Craig, MD. His holistic approach to aquatic movement – a symphonic blend of art and science - commanded international recognition. After retiring from Rochester he counseled swimmers and coaches at the Division I and Olympic levels, and served as a technical advisor to the 1996, 2000 and 2004 Olympic Swim Teams.

The Boomer Chronicles, a popular series of five videos filmed in 2000 with Milt Nelms, summarize his revolutionary thought process about relationships with water, core body postures, line and balance. Widely credited for shifting the direction of aquatic perception worldwide, his teachings were recognized with the 2014 Benjamin Franklin Award from the College Swimming Coaches Association of America.

In addition to his wife he is survived a sister, by two children, two grandchildren, and several nieces and nephews.

Donations in his honor may be made to support the Boomer Endowment for Swimming at the University of Rochester.  The Endowment funds, in part, the Genesis Lecture Series, which seeks to elevate the minds, bodies and spirits of Rochester student-athletes.